So how do we objectively measure the size of government?

In the next four sections we set out to try and use objective metrics to measure what is modern “big government” in the G7 using a simple conceptual framework. In the early 1980s Christopher Hood proposed what he called the “tools of government” framework. This grouped what governments can do into four categories, what he called Nodality, Authority, treasure and Organizaton (and used the somewhat confusing acronym “NATO”).

“Nodality” is the power governments have, uniquely, to compel the collection and dissemination (or not) of information about society. The earliest records of governmental activity concern the recording of such information but the 19thcentury saw an explosion of “state-istics” – the measurement of social activity by government.

“Authority” is the power of governments to create rules (laws and regulations) about how individuals, groups and the whole society should act.

“Organization” is the power of government, through compulsion if necessary, to organize bodies of people to carry out various collective actions – from war to providing education or health services.

“Treasure” is the power of government to collect and (re)distribute wealth within society. This is the subject of this chapter: “getting and spending”.

The diagram below illustrates how this an be used to map the Goldilocks Zone of Government? We’ll be expanding on this later. 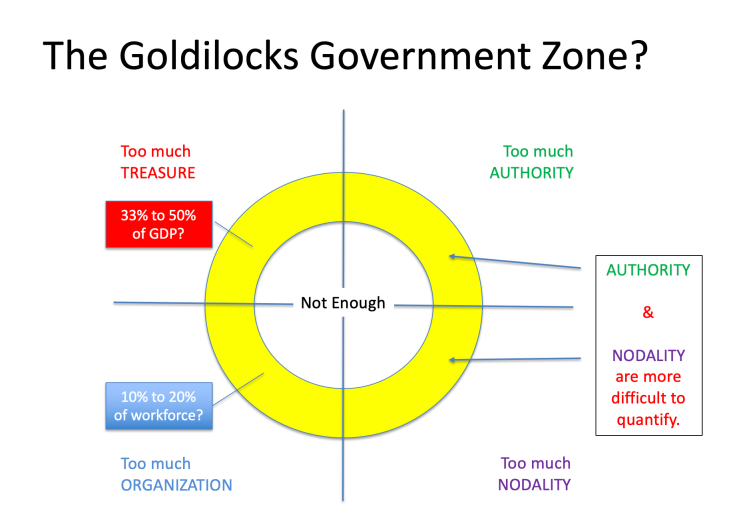